and Rigging Out Supper

On the sunny Friday afternoon Amaryllis - Jane and Paul - arrived at the moorings just as the Rangers - Roger and Lesley - were making their last ferry crossing. We enjoyed tea and cake with Ranger's 80th birthday flags fluttering. 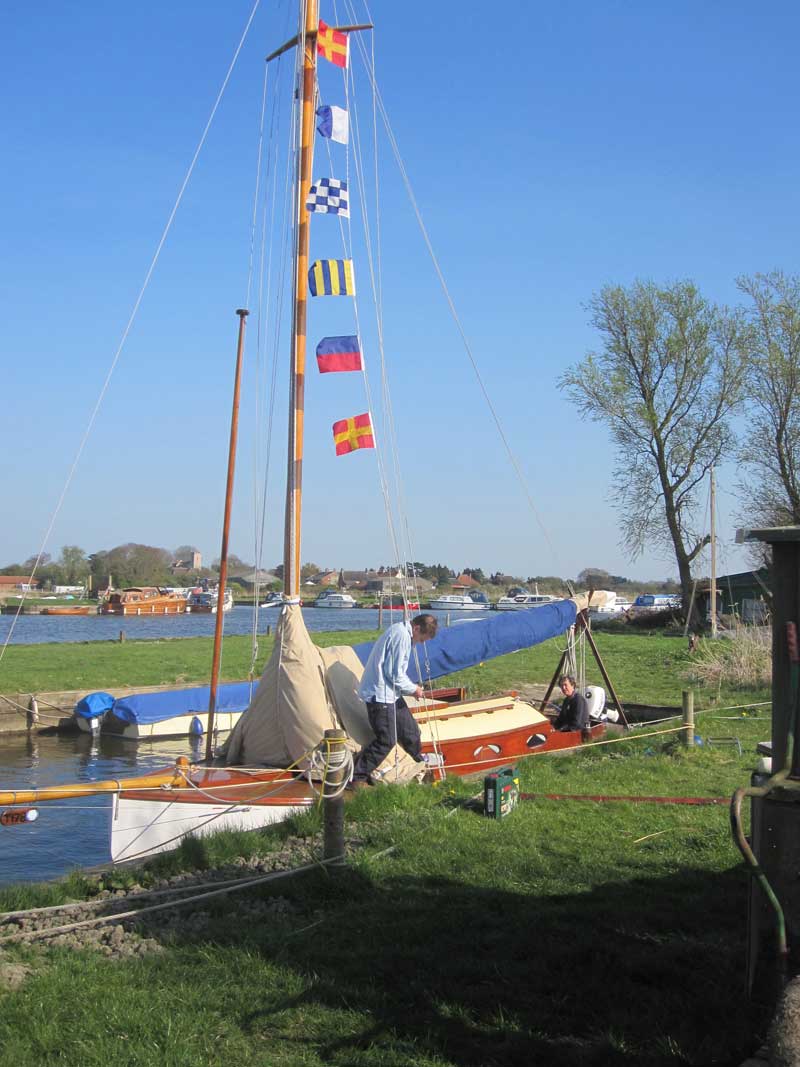 Photo: Jane Stevens
Once the  turf had been watered and a bit of strimming  done on site the barbecues were lit.  We saw an enormous bird of prey which we think might well have been an osprey, then saw and heard the cuckoo and hoped it wouldn't make an early start in the morning. John and Yvonne arrived by motor boat and joined the BBQ set. Saskia and Claypits crews Ruth and David,  Robin and Sue hailed from the mill side and then visited us in one of 'Jan's taxis'. They ate in the pub. After our bbq we cleared up and John and Yvonne set off for home. We retired to Ranger for a nightcap and had the pleasure of the company of a cute looking water vole on the bank. A lone Egyptian goose sparked an account by Roger of the tale of  " Borka " the unusual goose. The wind got up and stayed up flapping rigging on boats all around!

On Saturday morning the cuckoo had been heard early, but not by all. Claypits had a problem with their water pump so decided they must reluctantly return to base for repairs. Westward 5 was launched in the dyke on Brent's 17th birthday. Later Mischief was launched too so we were able to say hello to Brent, Paul and Claire, Nick and Amanda. Ranger hummed and hawed about sailing and eventually set off under iron topsail, as the wind had risen to 24 mph. By this time Sally had arrived from Potter with John, Steve and Lisa, followed by Badger with Sharon and Ian, and Nymph with Charles and Ann. Adrian and Ruth on Pixie headed for the dyke for loading and Richard with Lauren were preparing to sail on Barney. Dave Thompson helped Dr. Tom sort chains on the shiny new race buoys. 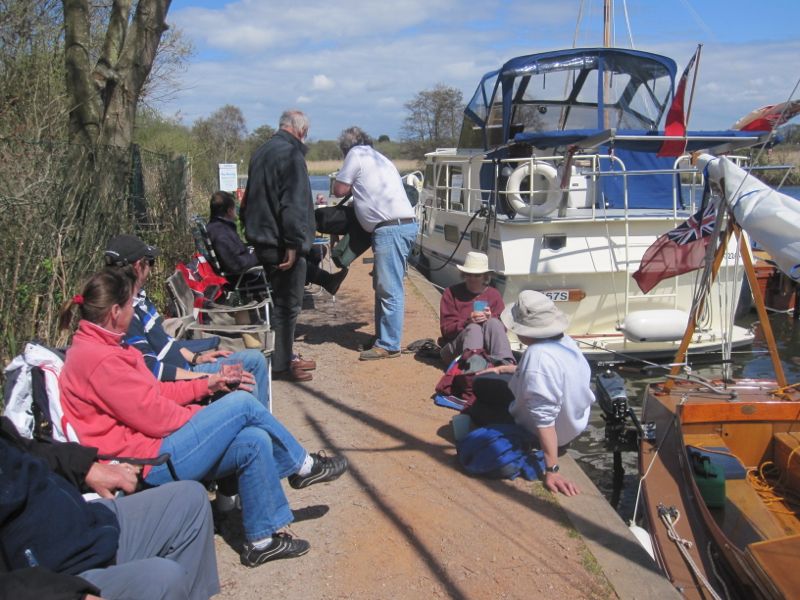 Having checked that everyone was accounted for Amaryllis set off under motor into the headwind. Blue was appearing between the grey clouds and we were hopeful of finding a space at Cockshoot Dyke inspite of the Horning Boat Show weekend. 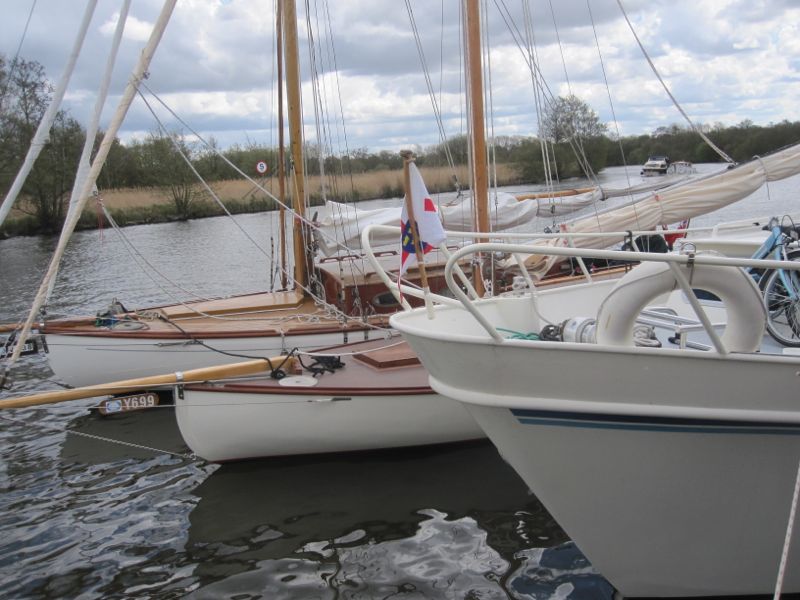 We managed to fit everyone in and Moss Rose with Colin and Frankie joined us from Horning in the  sheltered, warm lunch spot. Entertainment was provided by Broads Authority Rangers dealing appropriately with a speeding hullabaloo, after some of our members had,through self interest intervened to ensure that they moored safely in the vicinity of our boats. 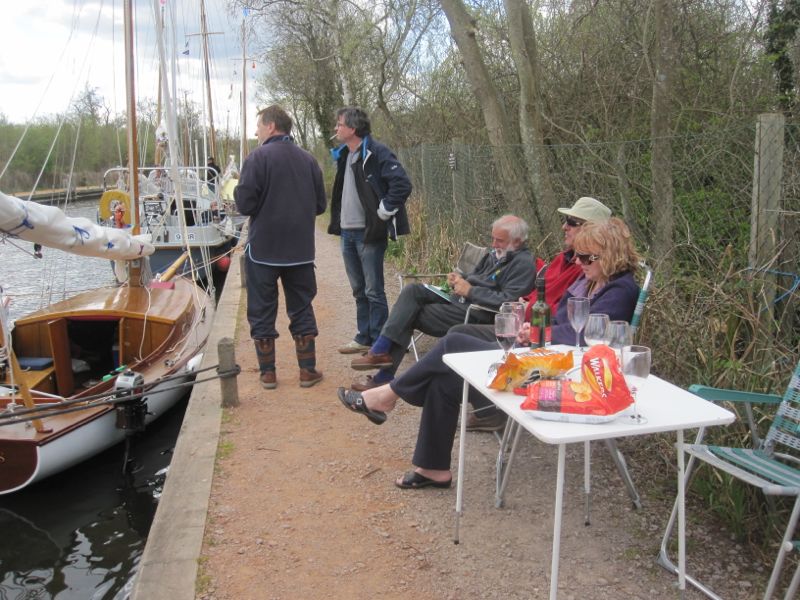 After a suitable lunch interlude the wind had moderated sufficiently so we determined to sail  to Salhouse. 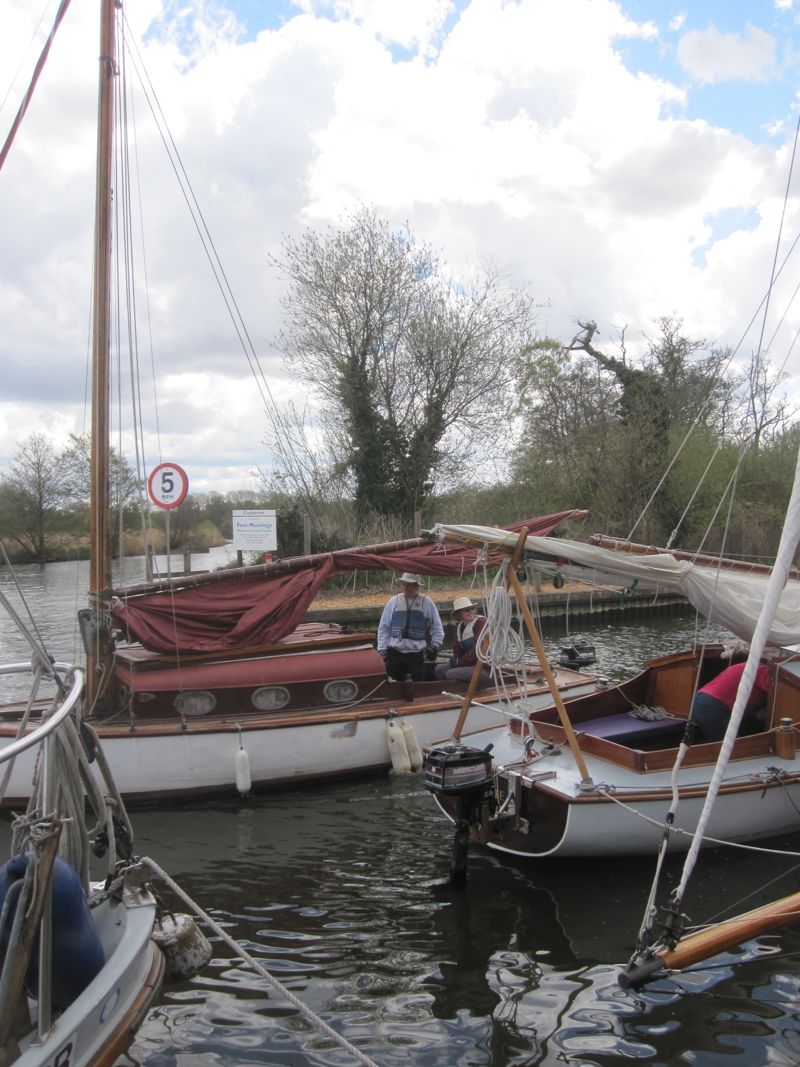 Brian and Gill met us on the Broad in Kermit. The reserved moorings were a little shallow, 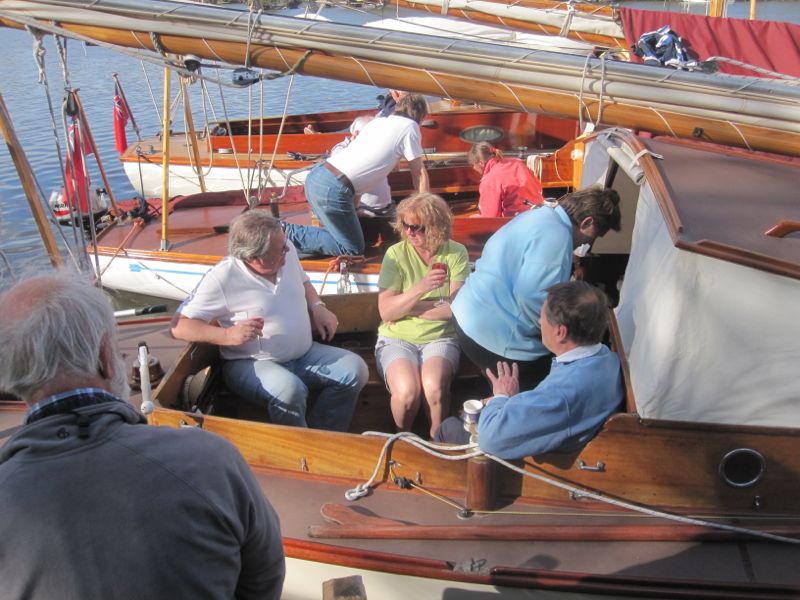 so smaller boats moored side on and the larger ones doubled or trebled up, or moored stern on.

We walked up to the  Fur and Feather for the Rigging Out Supper and were joined by the car crews of  Robin and Sue (who had fixed a new water pump) Jimmy and Carolyn, Jo and Cally, Mischievous Joe, Yvonne, Robert and later after work Louise. Although the service and in some cases the food quality at The Fur & Feather was disappointing, for most of us it was a nice social occasion in good company and we are grateful to Robert, our social secretary for organising it. Perhaps next year will be the time to self cater for the Rigging Out Supper? 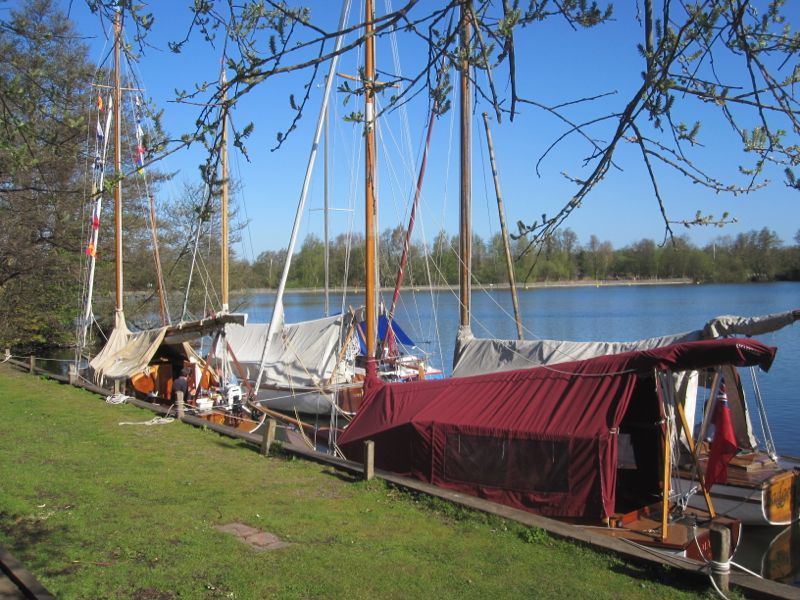 Photo: Jane Stevens
In the lovely sunny breathless Sunday morning we breakfasted and checked out the bluebell wood. 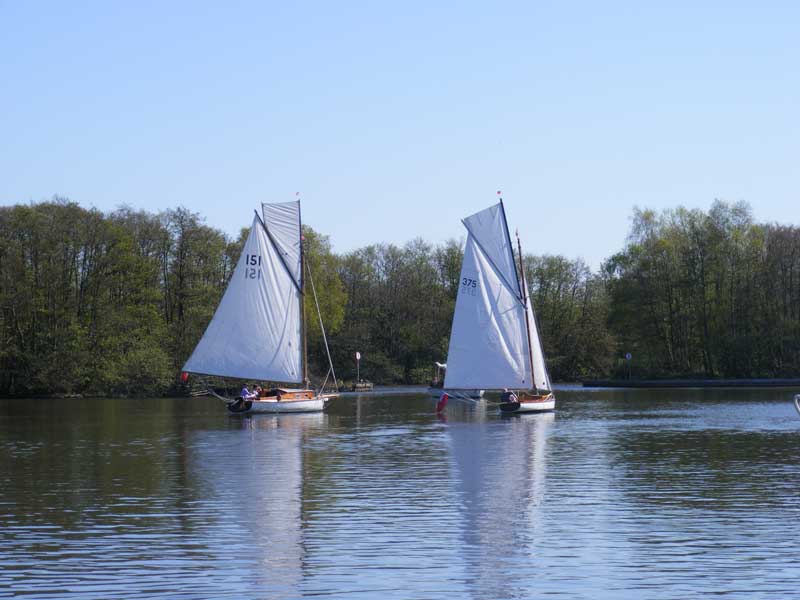 Boats sailed or motored or a combination on to Wroxham, although Saskia knew she wouldn't go under the bridge at Wroxham so she set off to meet up with Claypits. We sailed across Wroxham Broad and picked up Joe and Cally from the moorings outside their Wroxham home. Masts were lowered and boats motored or quanted through the bridges to the ample free moorings on the far side for another picnic in the sun.  Mostly by motor, though some sailing was achieved, we  moved gently along towards Coltishall. 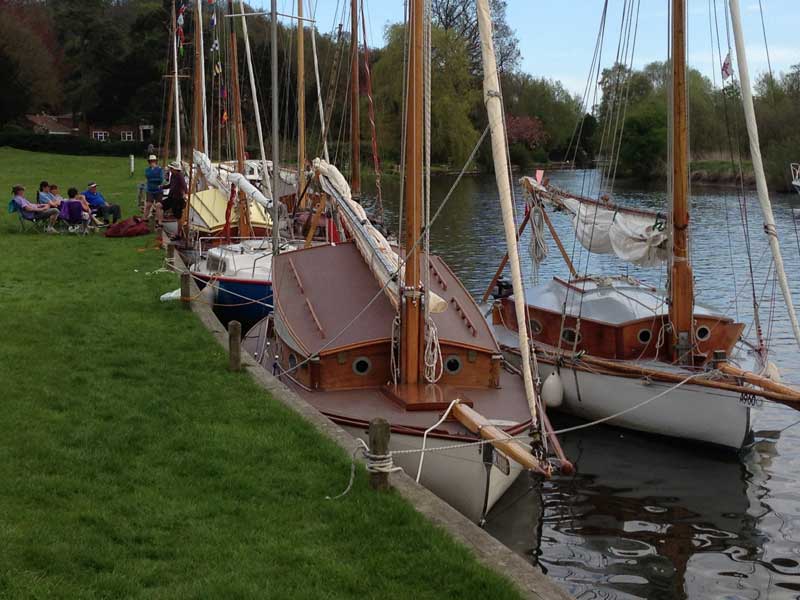 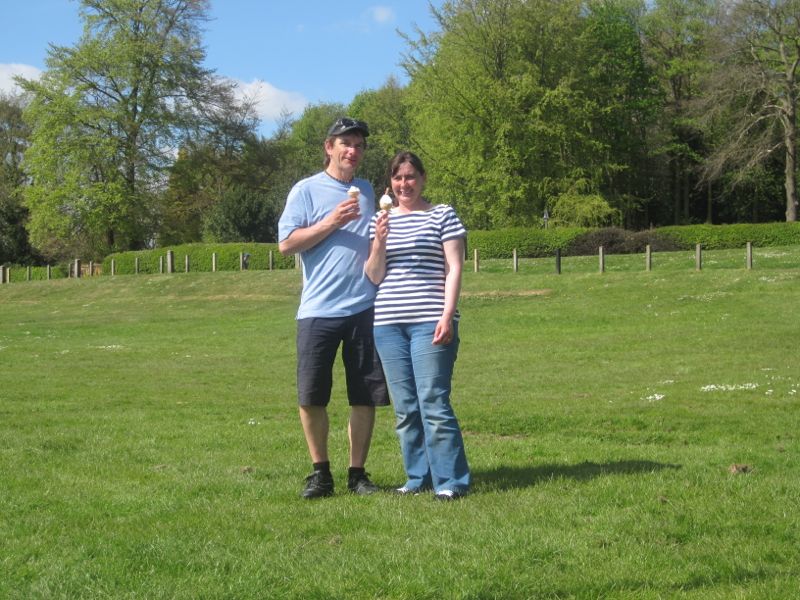 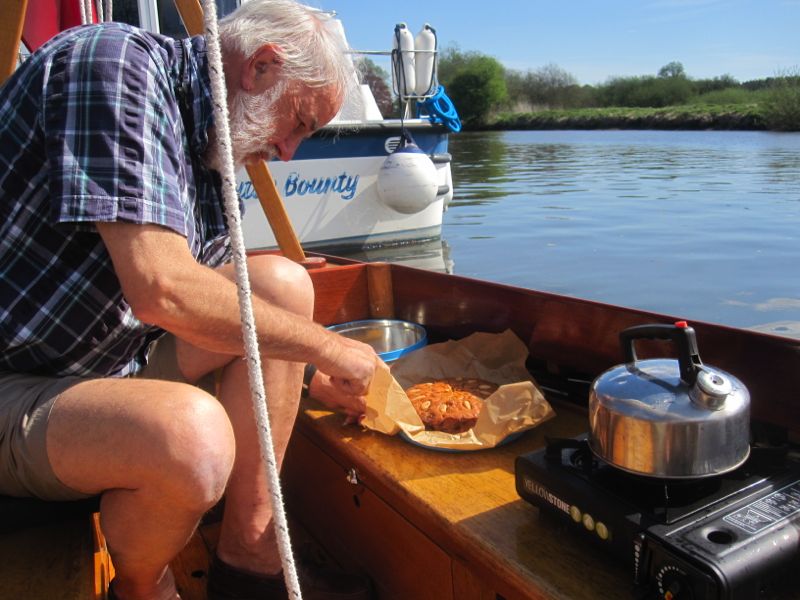 followed by wine and socialising until supper time. Badger decided since their canoe was punctured that instead of paddling up from Horstead Mill as planned they would travel part way homewards and be back earlier rather than later, and we knew the budgie would appreciate that: ) 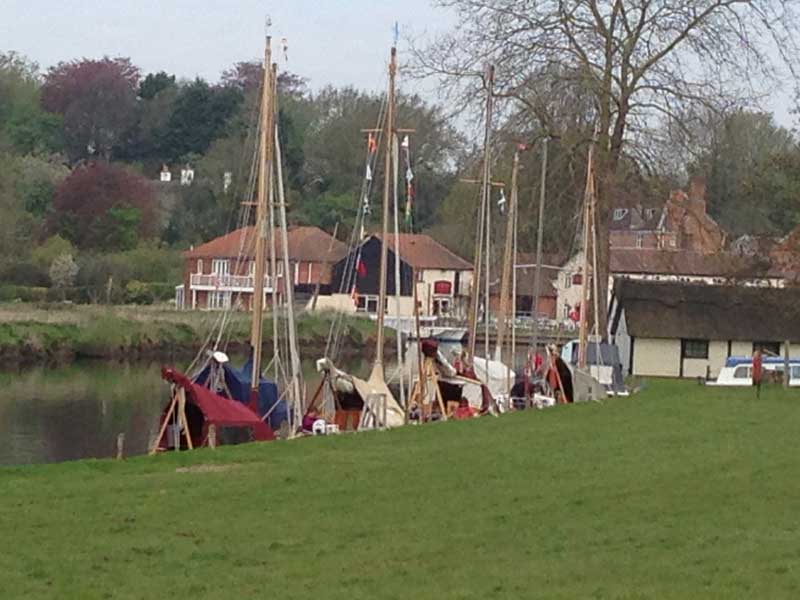 Nymph had additional crew and went on to the common. Some went for a great meal at the Kings Head while others barbecued. 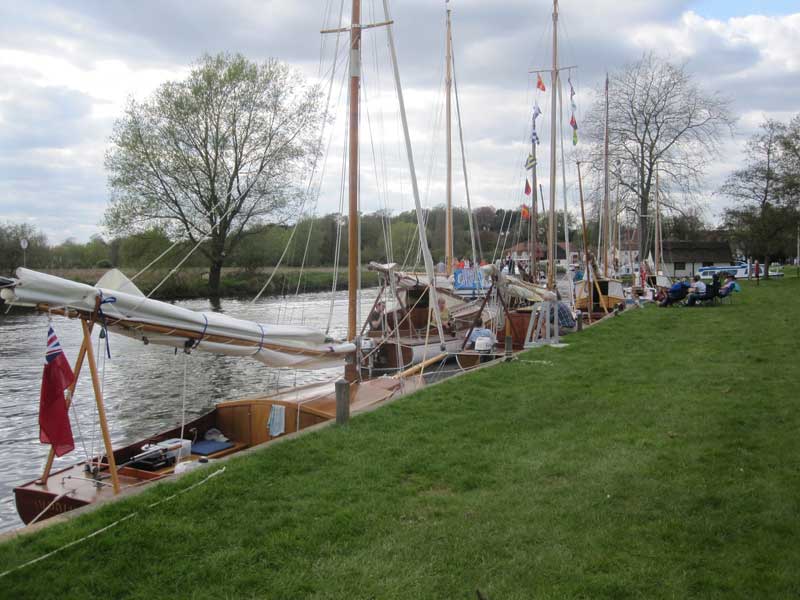 Monday had been forecast with zero cloud cover but that wasn't quite how it was, but it was still warm. 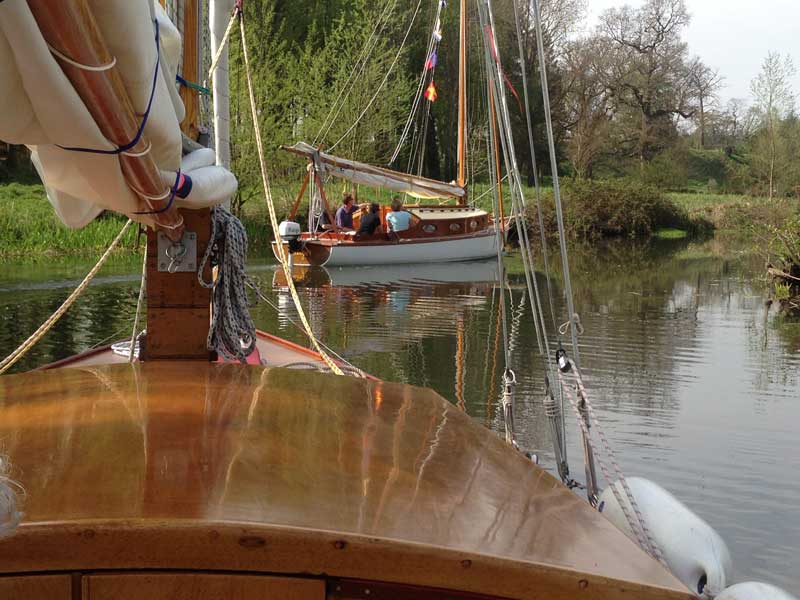 Jimmy and Carolyn arrived to board Ranger and lead an expedition to the head of navigation. 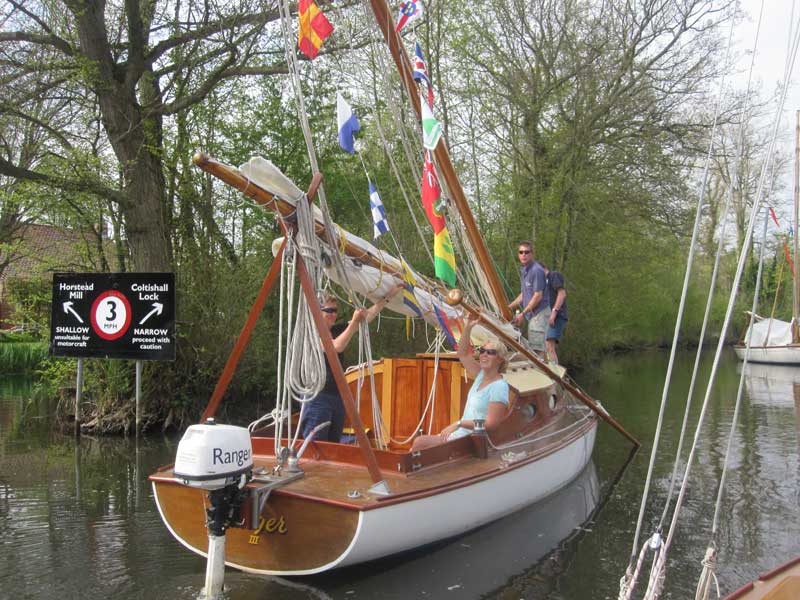 Several yachts made it all the way to the lock in spite of shallows and overhanging trees. We met Nymph on her way back. 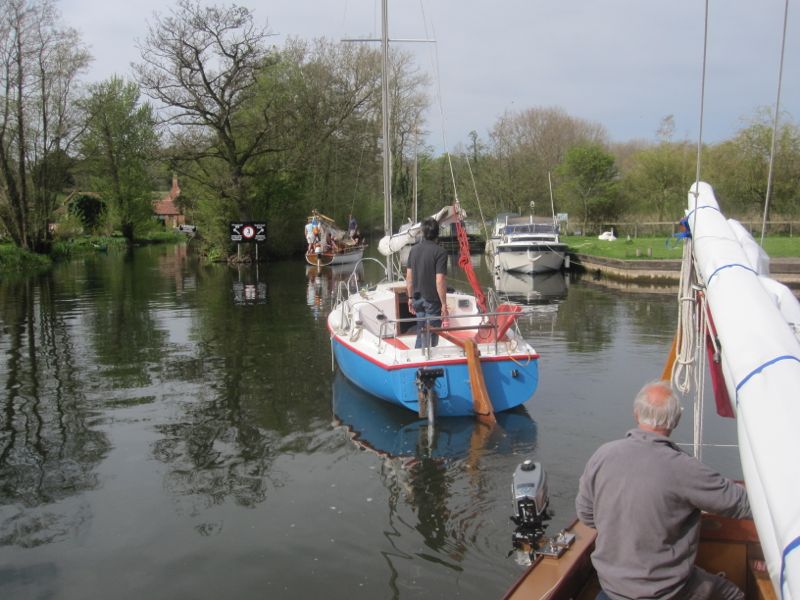 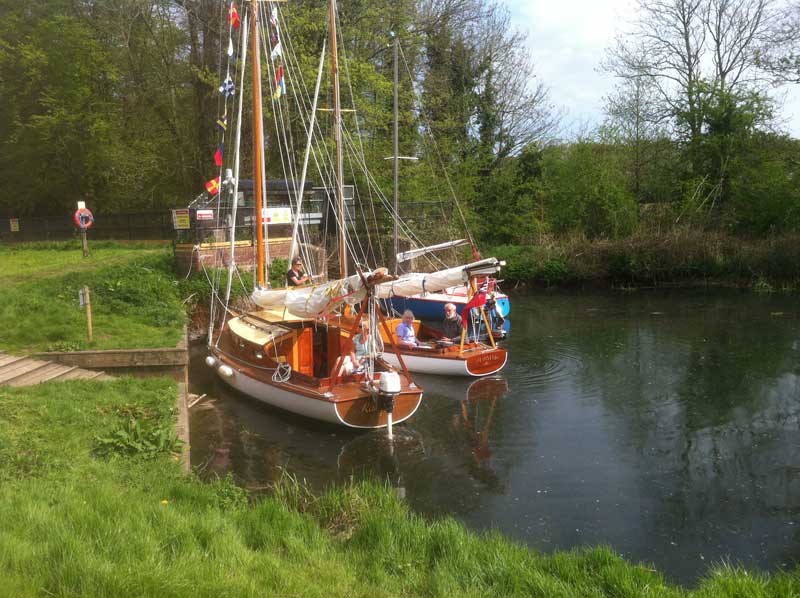 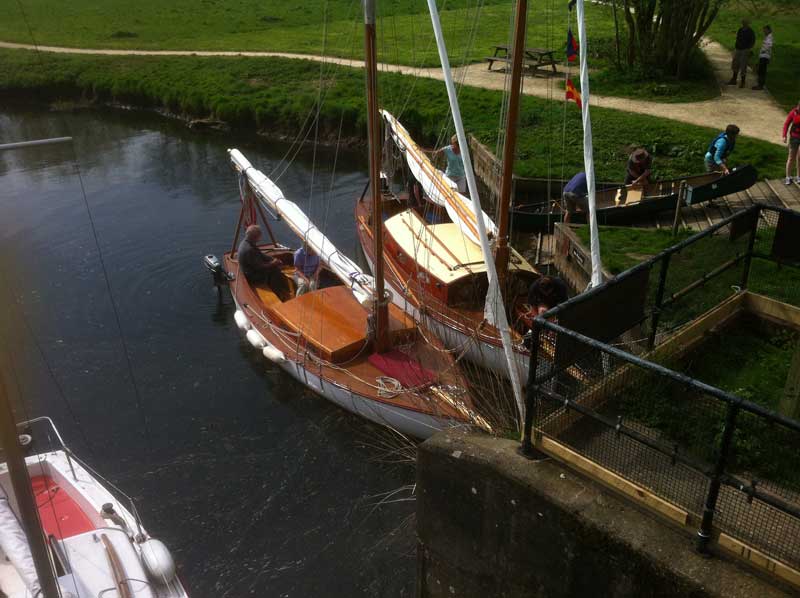 Photo: Richard Culling
As there was no wind at all for the return voyage, even on Wroxham Broad, 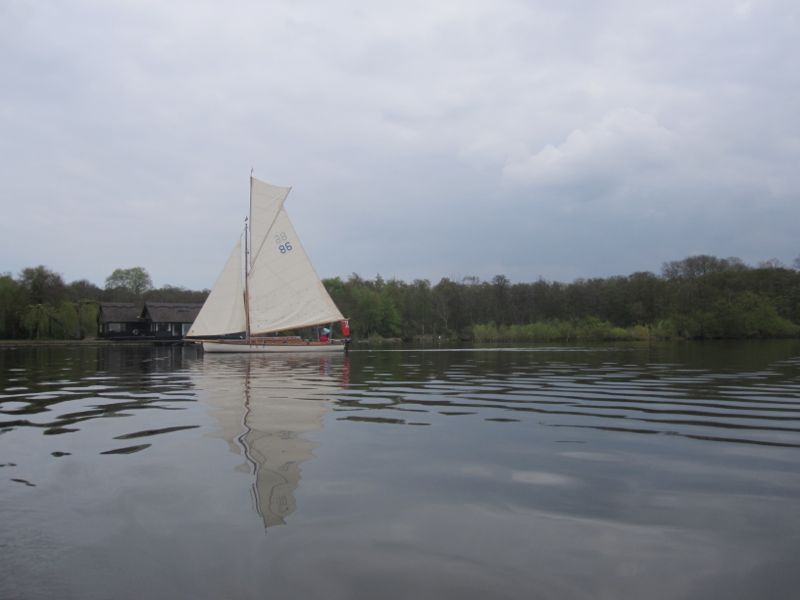 we reluctantly motored back towards Salhouse where quite a few of us mud-weighted with Dave and Fiona on Dove, and had yet another lunch in the sun. We motored as far as Horning, by which point there was enough breeze to hoist the sails and beat to Thurne Mouth. We passed Saskia who told us they'd had a lovely day, and Mischiefs Steve, Di and Joe who said they had tried her out and everything was fine, even the boom was the right way up.

For us the final leg was a reach and run, arriving at Womack about 5pm. 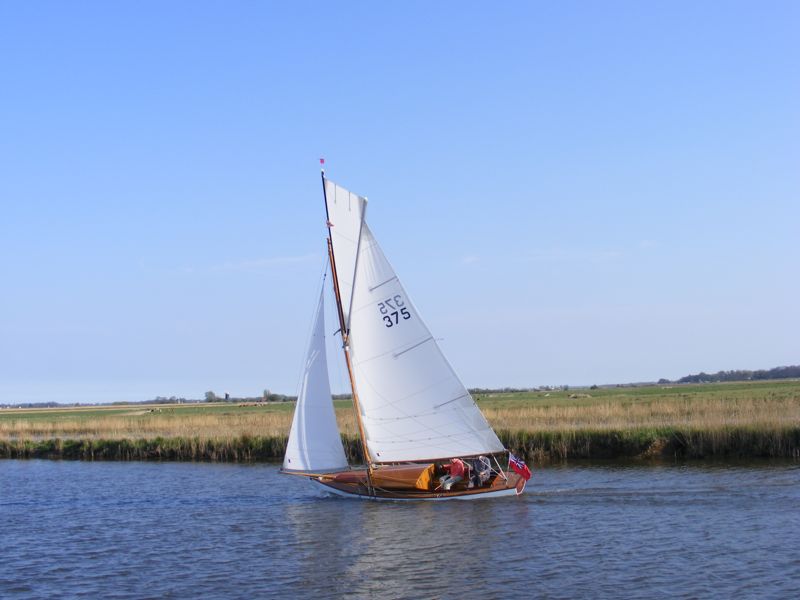 The following 13 boats and crews all participated in the cruise in full or in part which is unprecidented at this stage in the season. Great too to see some of our newer members.