Despite some apprehension, EACC emerged from lockdown with a limited version of its Summer Regatta at the weekend and very successful it was too.

May I start by acknowledging the sacrifice made by those members who were unable to participate due to the club's decision to follow the letter of the government’s rules on social distancing which made it impossible for mixed household crews to take part. This obviously affected some of the larger boats or those who normally rely on friends rather than family as crew. Thank you for your understanding.

So, for the Saturday race, a Thurne roundabout, there were 21 entries from 11 River Cruisers and 2 Allcomers. A good breeze which varied between westerly and south-westerly made choice of start time critical especially as the wind dropped and the ebb tide strengthened making for slower progress against wind and tide through the middle of the day. It soon became clear that the early starters enjoyed a definite advantage. In fact the first three boats away, took the first three places. Colin Chettleburgh in big Breeze on scratch, made the fastest time at 53mins and 10 seconds winning him the Cooke Cup, some two minutes faster than Brian Wilkins’s corrected time in Catspaw and a bit over four minutes ahead of Ian Patience in Kingfisher. Of the three Allcomers entries David Frary in Helen, a Yarmouth One Design, achieved the fastest time a couple of minutes quicker than Marty Thompson in YBOD Dingy Skipper.

It seemed odd not to congregate for beer on the club frontage after the racing so everyone dutifully dispersed to their chosen moorings for the night. As darkeness fell the rain started and it continued, sometimes heavily, through most of the night and at about 10.30 on a rather overcast Sunday morning competitors emerged pessimistically clad in full waterproofs. But they needn’t have worried because by the start of the first race the rain had stopped and a moderate Northerly breeze was drying things out.

Steve, Di and Joe took over from Paul and Jane on the line and a slightly shorter course was set by bringing the C mark in closer. The 8 starters in the River Cruiser fleet were split equally in two starts with a good beat up the first leg to C. Brian and Michelle in Catspaw having the best in the first start maintained that lead throughout the race although the gap was closing a little by the last beat up from Thurne mouth. In the second split Colin and Frankie Little in Sandpiper had a similar command of their half. On corrected time it was Sandpiper that emerged the victor taking the Roy Pike Trophy, Paul and Jane in Pippinjack second and Catspaw third.  Despite David and Matthew in their borrowed Yarmouth finding it a “bit of a handful” they managed another win in the Allcomers, this time taking the long missing Greyhound cup. We’ll have to see what we can find for the annual prize-giving in whatever form that takes in this strange year.

Mooring in the reeds for lunch between the races was the order of the day and the second race was brought forward by half an hour. This time it was Pippinjack that got her nose ahead in the first start and was able to make sufficiently up the beats to hold off the opposition on the off wind legs. Again it was Sandpiper that dominated the second split over the water but it was not enough this time to beat Pippinjack who retains the Filibuster cup. In fact Mike and Sally Jones in Nutcracker were morally second but they were on a provisional handicap so that technically gives second place to Sandpiper with Richard, Nell, Madie & Katie Smith in Alchemy third. The two Allcomers, had a good tussle by all accounts being on the same handicap and changing positions during the race. But, in the end the YOD Helen completed a hat trick by winning the International 14 Trophy.

Thanks to all concerned especially the line crew and to Tom Moore for safety boat duties both days and to John Aves for standing by on Saturday. I must also thank our Mate, Liz, for all the work she did in checking with the appropriate authorities and seeing that everyone was happy and felt safe. I would like to echo her post in the Summer Regatta What’s App group “Well done to everyone for being prepared to take part and for adhering to the guidelines. Overall a weekend that is a credit to EACC and it's members”, which was our aim!

“Glad all went well at the weekend - it was certainly busy on the 3 rivers for all members competing! Thank you for organising with strict #COVID19 conditions in place 😷☀️⚓👨‍✈️
#1048 @NorfolkPolice @BroadsAuth”

Thanks to Sue Hines for the following Saturday photos 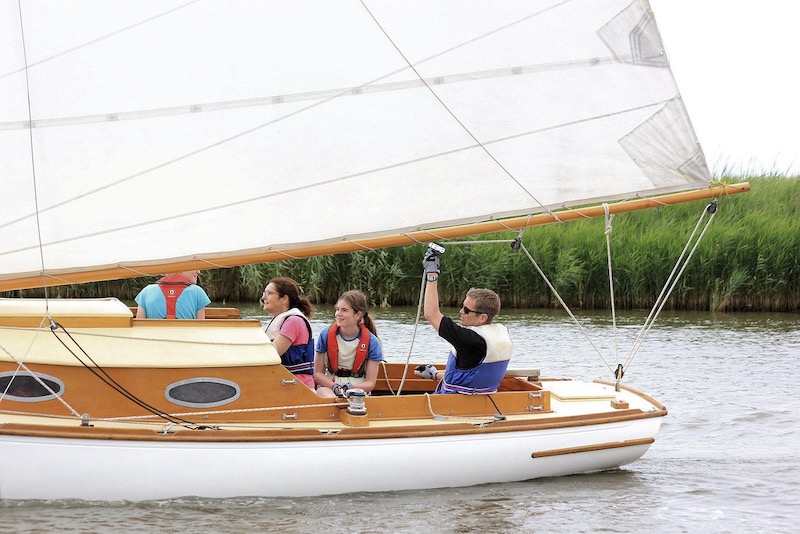 Thanks to Di Seeney for the following Sunday photos