At the beginning of the week the weather forecast for the weekend had looked poor, becoming poorer, so I stopped looking at it. How wet could we get, really, on the beach with the wind from the east? So I stopped thinking about that too. When Sunday dawned dry, warm for February and with a bit of a mist to put the landscape in soft focus I was rather glad I'd not wasted my time fretting about it.
Fifteen people made the early start for the lighthouse tour, with the Jasmines having left home at 06.30 to get to their first EACC social.  Happisburgh is the only independently run lighthouse in the country, rescued from Trinity House's closure plans in the 1988 by a group of committed locals and now run by a Trust. We had a briefing on the history and the engineering from the knowledgable and very passionate (well it was Valentine's weekend) guide Peter Martin, and then made the ascent to the top in two groups.  The stairs are narrow, obviously winding and it feels higher than 26m when you're looking down! At the top we could see the prisms through which the light is projected and which create the characteristic beam.  Viewing EACC members through them reminded me of the distorting mirrors of fairgrounds of old, except nothing's going to make Joe (Mischief) look plump!  Peter and Trevor, the second guide, were incredibly knowledgable, and full of admiration for the quality and thoroughness of the construction, pointing out the little details designed to help the lighthouse keeper in all eventualities - such as the little hand cast on a particular pipe so it could be distinguished in total darkness.  Similarly, the diamond pattern windows on the light chamber, characteristic of all lighthouses, isn't an aesthetic feature but functional as this pattern casts no shadow across the beam. It was a shame it was so misty as visibility to sea was reduced, but it was a good view nonetheless. For those that haven't been I would recommend Happisburgh lighthouse, as long as you have a head for a wholly deceptive 26m. 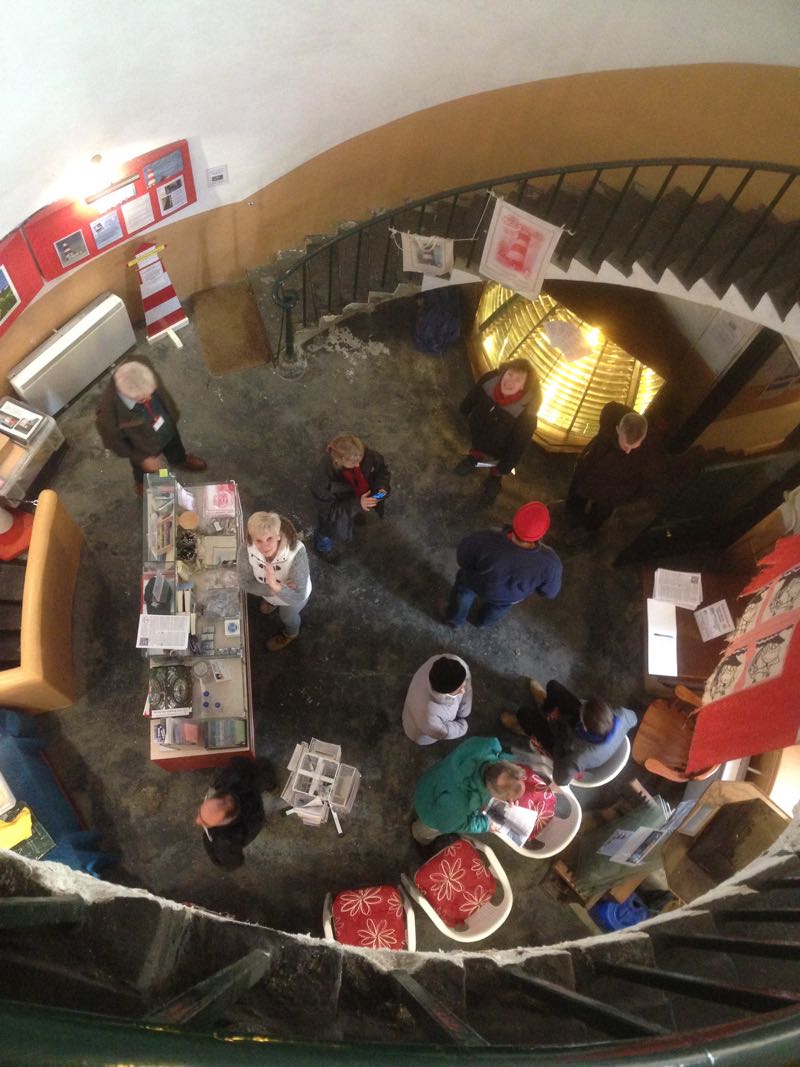 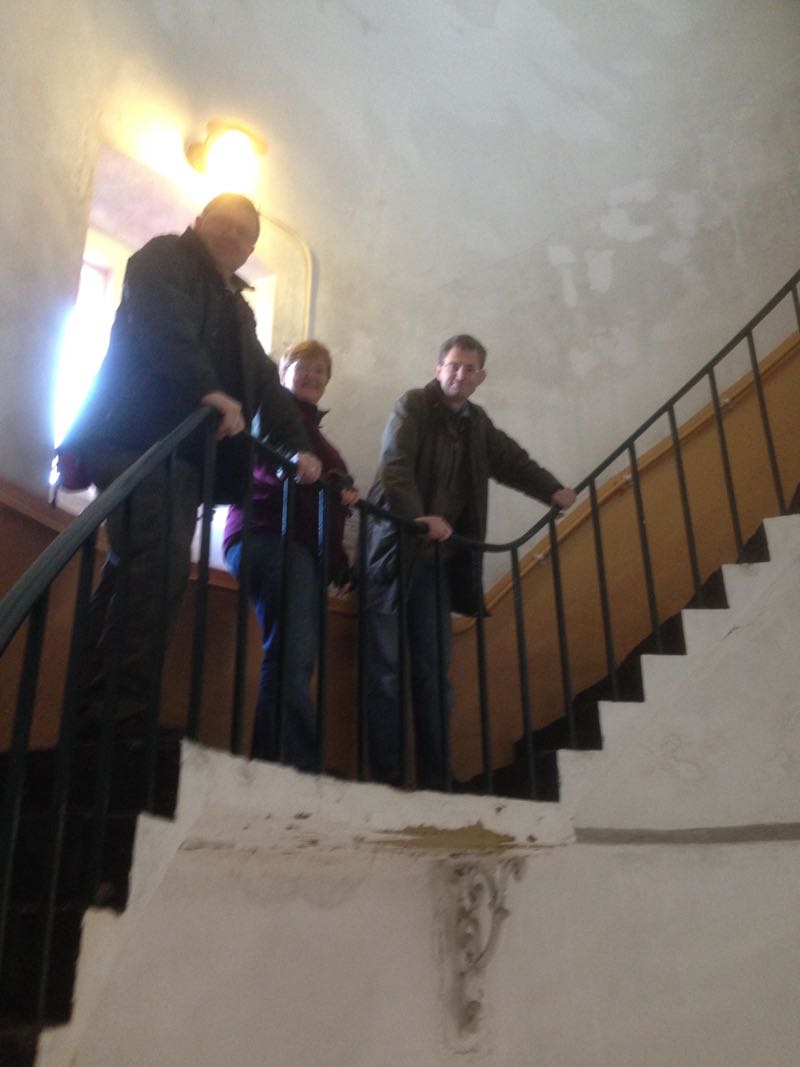 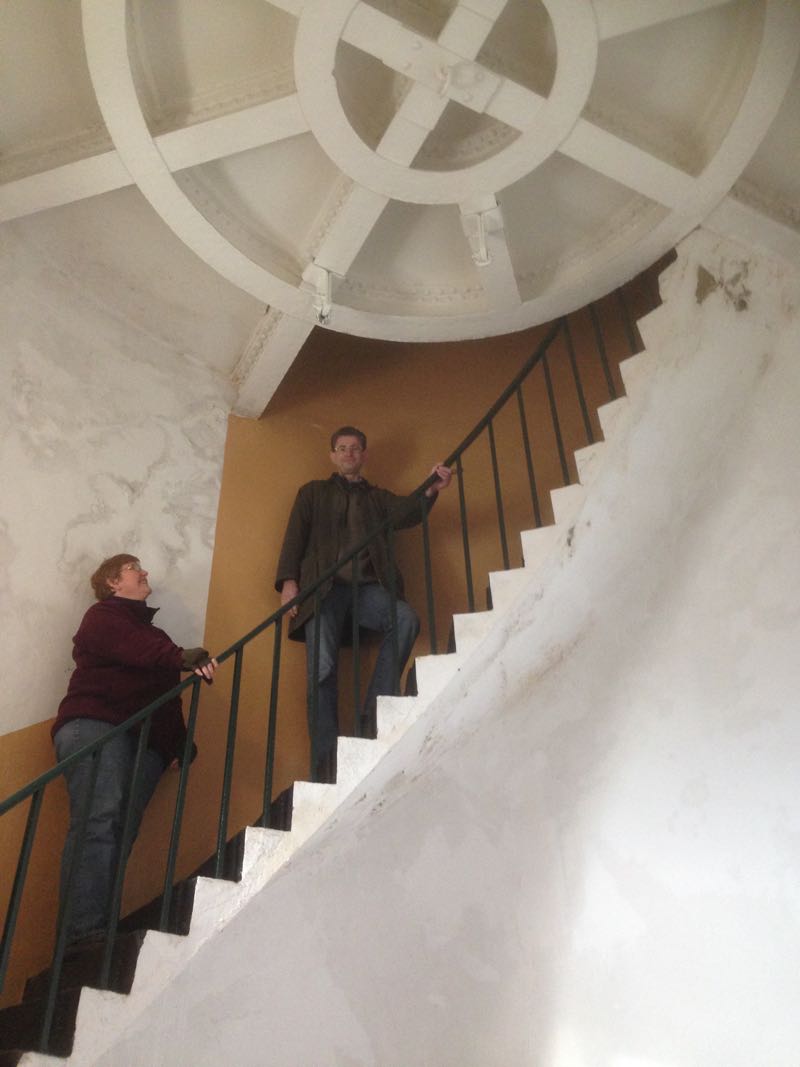 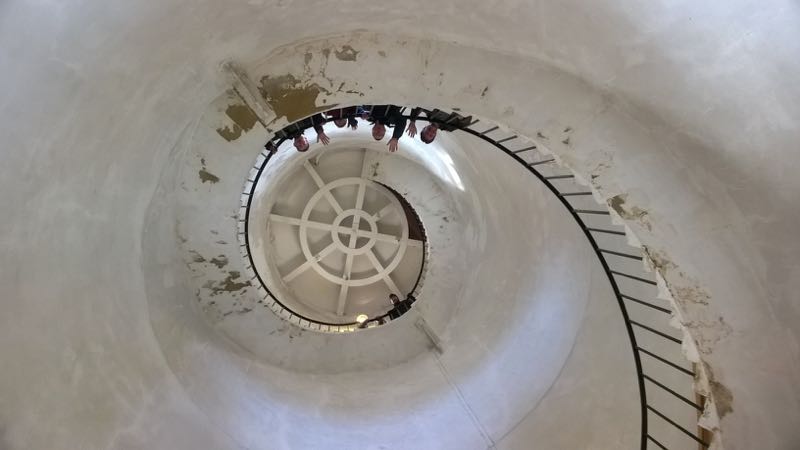 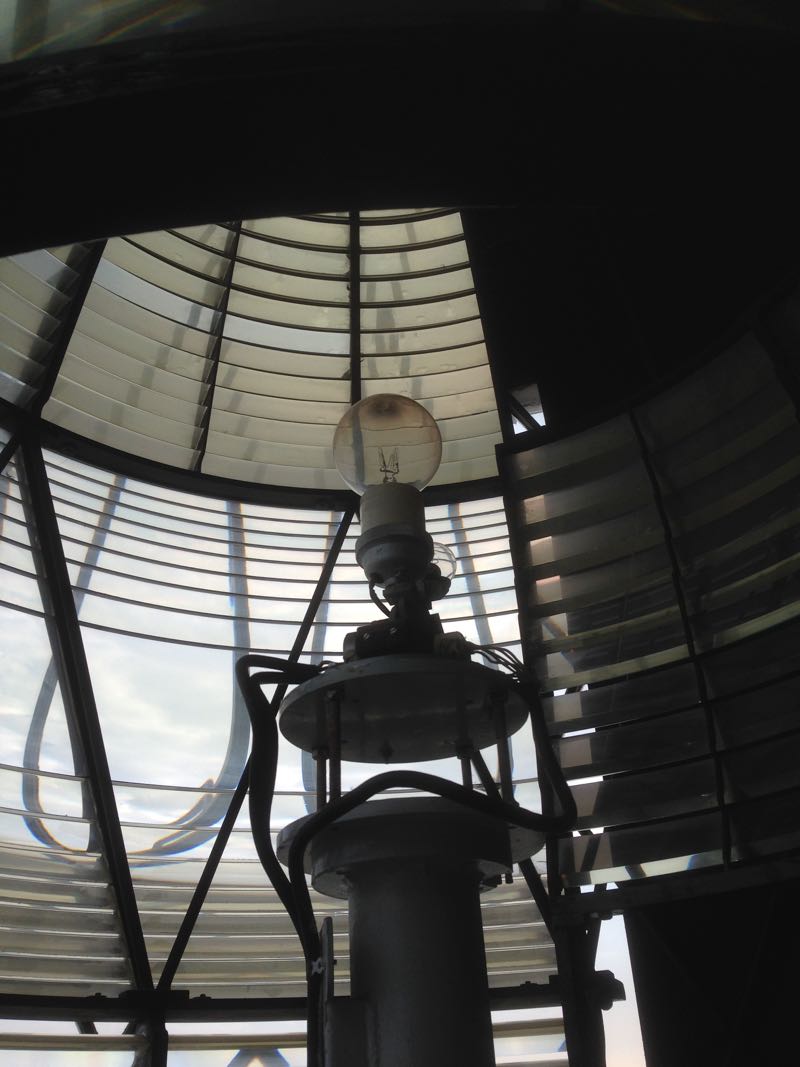 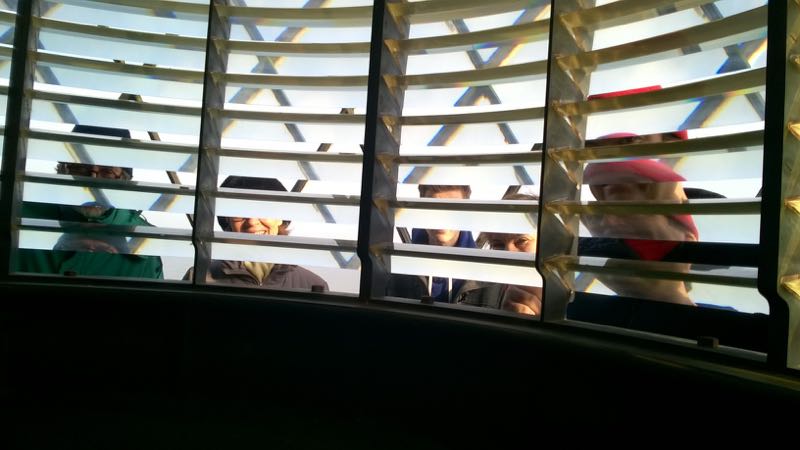 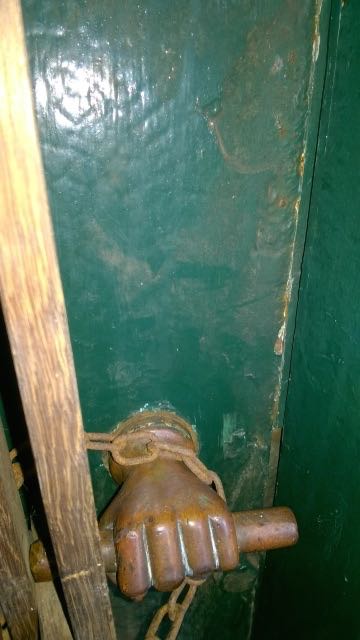 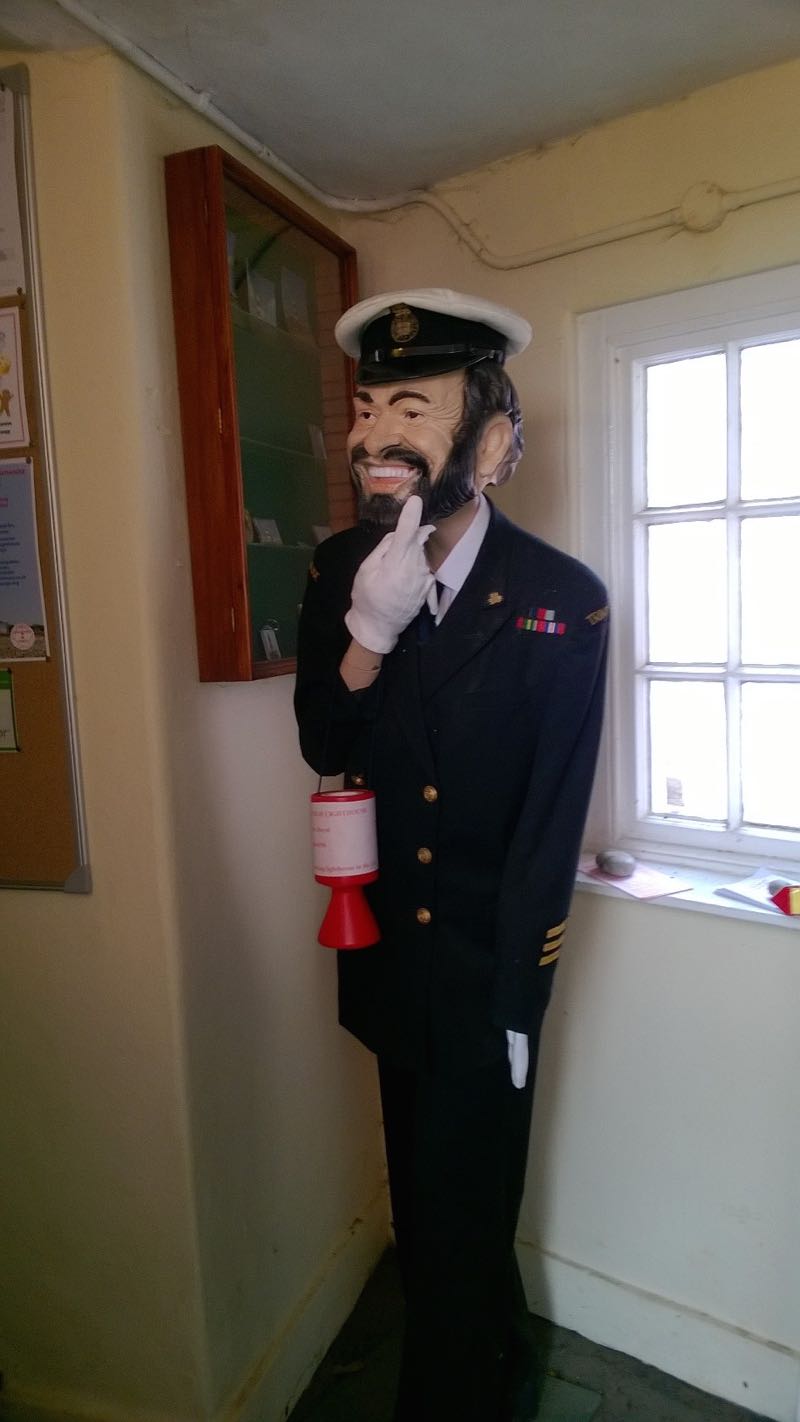 We then picked up the remainder of the party and set off for the walk along the beach. I'm not going to name the 10 late starters (who'd had the opportunity of an extra hour in bed), but it did n't support the Roger (Ranger) Southern Rivers Cruise 2014 theory that it was n't that the retired people got up early, but that the drinkers got up late. Need to think about that one again, Roger. Heading up the beach it wasn't so much a walk as a 'walkies', and with 9 dogs we made a striking group. I particularly liked the way that John (Ceres) kept to the right in his 'navigation-light green' jacket, whilst Robin stayed to the left in his 'navigation-light red' one - very tidy!  I had wondered how Jo (Sun Glory) would manage as this was his first proper walk post-knee replacement, but he fairly bounded up the sand with almost as much enthusiasm as Jasper (Breeze), although he also doesn't always come when he's called! A pit stop was had at the café at Cart Gap, for warming hot drinks and fabulous looking marshmallow topped chocolate for Ruth (Cordon Rouge) and then we pressed on along the track at the rear of the dunes, past a stretch of bungalows which wouldn't look out of place on the riverbank at Potter Heigham, although on a receding coast like this they will have a very different relationship with the water. 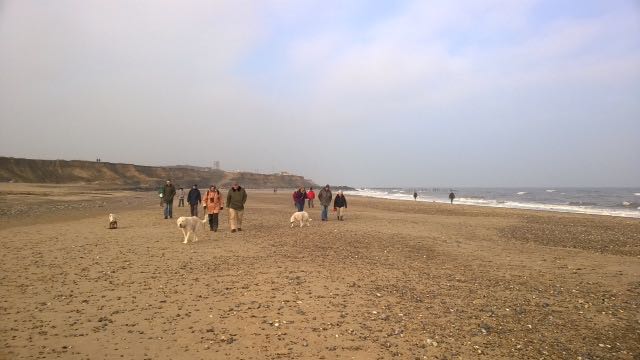 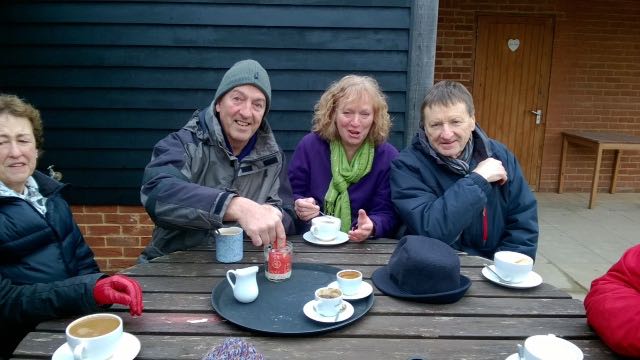 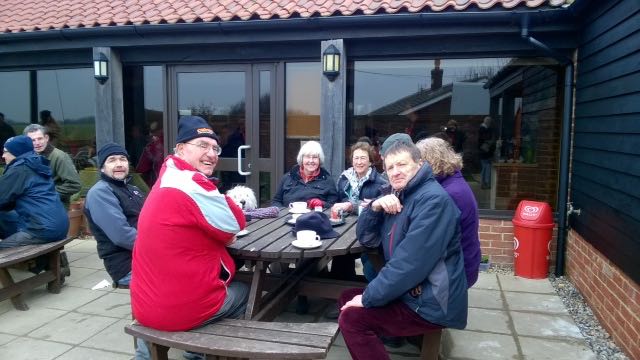 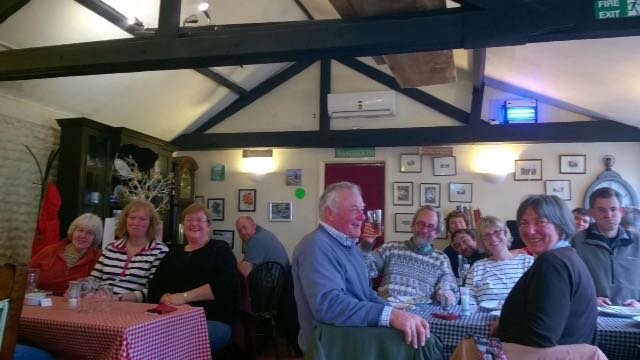 Returning to Happisburgh, we headed to the Hill House pub, which is now home to The Dancing Man microbrewery.  The Sunday carvery is hosted in the separate tea room building and this had been reserved for our group - it was great to have the space pretty much to ourselves, to eat, mingle and chat.  Lovely and warm too. The food was very good, freshly cooked and plenty of it on an 'all you can eat' basis and for £8 per person it must be pretty much the best value around.  The homemade horseradish sauce had that kind of kick which you feel in the back of your head first and then makes your nose run - fabulous.  I asked him if he bottled and sold it, but he didn't get the hint! In that classic Norfolk way the landlord/chef used to work with Steve (Mischief) and it wasn't clear who was most surprised to see whom. Joe (Mischief) ate well, two plates, but didn't look any plumper. Other than the fact that all the real ales ran out just as Jo (Sun Glory) got to the bar, the pub got a big thumbs up from me.  Richard  and Sally (Barney 2) are very lucky to have such a super local.
Thanks to Richard and Sally for the idea and for holding my hand through my first EACC event as social secretary.  It  was an excellent day out and now I have that under my belt I'm wondering what it was that I decided to stop worrying about?
Cally Smith
PHOTOS: Richard Culling and Cally Smith